I very much hope you are keeping well and will have been double jabbed where desired. I continue to be working in the Northampton vaccination hub for 15 hours per week and this likely to continue until March 2022, though the rate of vaccination has dropped from earlier in the year.

There is much to update you on...

It is with immense sadness that I advise you that Ray Fooks MBE, Headmaster of QEGSH 1972-76, passed away peacefully on 25th May 2021 at Lady Nuffield Home Oxford.
RIP Mr Fooks, a true gentleman who was so saddened by the closure of QEGSH and the demise of the grammar school. It was always a great pleasure to see you at the HOEA dinner, most recently in 2019 when you joined me on the top table.

Additionally, I have received the following from David Gilbert:

It is with deepest regret that I have to inform you that my brother-in-law, Christopher Vallender, died peacefully yesterday at his home in Stourport, following his brave battle with cancer. Chris was at Hartlebury from 1954-1961. He attended many Annual Dinners over the years and I know that several of you were contemporaries.

The funeral is on Monday 2 August at 10:30 at Wyre Forest Crematorium DY13 8DE, followed by refreshments at Ombersley Golf Club.

The number of members has grown to a pleasing 82 from inception 25th January 2021 and a 27 of 'new contacts' have been made. For those of you on Facebook please have a look through your friends and give those who are OEs a nudge to search for the Facebook page by putting HOEA in Facebook search and send a 'join group' request. Alternatively, send them an invite to join our group. I think that's how it works!! Lots of great memories and discussions shared.

There are 23 members and I've identified a further 20 possible members again this too has been another good source of finding OEs. 14 of these are 'new contacts' too.

I'm exploring the idea of having an informal gathering of OEs for a drink/buffet/catch up in September/October possibly in the Stourport/Kidderminster area. Please drop me an email to indicate if you may wish to attend to squonk53@icloud.com so I can get an idea of interest and thus make headway by the end of July 2021.

The Old Carolians are holding their annual Summer BBQ to which OEs and KHS OGs are invited. Details are as follows: https://www.oldcarolians.org.uk/events/2021/jul/summer-barbecue-2021/

OEs and KHS OGs are also invited to the OC dinner which is usually held on 20th November 2021 details to follow.

We've been advised that Craig Moreton, Principle is leaving for a post in Dubai within the same organisation and that his present deputy, Sara Ferguson, would replace him. Craig has been an excellent supporter of the HOEA and our good wishes go to both.

John Thornton has joined the HOEA Committee and has taken up the role of Vice President ahead of becoming President in 2023. John is also looking to develop and share articles from our archive.

I'm seeking to have a key contact/coordinator for each year group, if you would like to take this role up for your year of starting at QEGSH, please let me know. Primarily it will to help fill in the contact details for fellow OEs from your year group.

I advised you previously that I would give you an update on the Annual Dinner planned for 27 March 2021, following our ‘Zoom’ committee meeting on 20 January 2021. Until there is a clearer picture as to how we can start to relax restrictions, we agreed the following:

Agenda for 2021 and the BGM minutes from 2019 are available to download above.

A link to the Zoom meeting will be sent in good time.

I have created a Facebook group, ‘Hartlebury Old Elizabethans' Association H.O.E.A.’ Please send me a request to join and I will add you to the group. For those of you who are on LinkedIn there is a QEGSH group at https://www.linkedin.com/groups/4180899/

Emails will, of course, continue to be sent as well.

In the meantime, keep safe and I look forward to seeing you at the Zoom meeting.

Very best wishes to you and your families.

May the Old School Flourish

The Guest Speaker was Roger Smith, at school 1966 to 1973, ex T.A. officier, seeing action in helicopters with a N.A.T.O. air mobile infantry battalion. Roger runs the Duke of Edinburgh award scheme at the school he taught at and 2 years ago trekked to the summit of Kilimanjaro.
The Association is greatly indebted to Craig Moreton, Principal of The Cambian New Elizabethan School, for the use of the school for our Annual Dinner.

BIENNIAL GENERAL MEETING
Saturday 13 April 2019 at 6.00pm (prior to the Annual Dinner)
at the CAMBIAN NEW ELIZABETHAN SCHOOL, HARTLEBURY

The Biennial General Meeting of the Association was held at the Cambian New Elizabethan School on Saturday 13th. April 2019 at 6.00pm.
The Agenda was as follows:

For minutes of the last meeting click below (PDF)

Note: Darryl Cope was killed in HMS Sheffield in the Falkland conflict, 14 May 1982.

Dear Old Boys,
The committee has examined the responses from assembled attendees and the overwhelming opinion was to maintain the status quo with regards to the timing of our dinner.


If you have any ideas, please let me know (email: dsallen10@gmail.com). 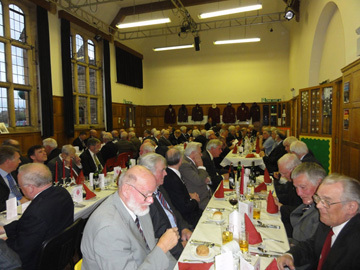 Hartlebury Old Elizabethans Association (HOEA) is an organisation formed by the Old Boys of the Queen Elizabeth I Grammar School, Hartlebury, Worcestershire, UK. The Association continues to hold successful annual reunion dinners at the School, usually on a Saturday before Easter. It is managed by a Committee, chaired by a President and comprising elected members including an Honorary Secretary and an Honorary Treasurer. All committee members are volunteers. The Association currently maintains a satisfactory financial position.

The Association supports a number of undergraduates with bursaries, is custodian of a wide variety of School archive material and memorabilia and from time to time publishes relevant material concerning the School and its long and fascinating history.

The new General Data Protection Regulations came into effect on 25 May 2018. The contact information (data) held by HOEA is solely used to provide you with information on Association activities. As a result, it was not necessary to email everyone seeking another ‘opt-in’.
You may, at any time, ask to have your data removed in which case, of course, we would be unable to communicate with you and your membership would effectively cease.